Girl Saved From Kidnappers in Nigeria After Screaming The Name...

My daughter escaped from kidnappers’ den after shouting Jesus name 100 times – Magistrate .One of the kidnappers of a Rivers State-based Magistrate’s daughter has been arrested and the Magistrate has narrated how his daughter was able to escape.

According to Vanguardngr, 22-year- old suspected kidnapper, Gift Taise (pictured), a member of Icelander cult group and four members of his gang had in April 2020, abducted the girl after dispossessing her parents of their cash and valuables.

However, while the kidnappers were still negotiating the ransom with the victim’s family, she managed to escape.

On how she managed to escape, the magistrate told the police that his daughter was menstruating at the time she was kidnapped. She cried, begging her abductors to help her get a pain reliever for the pain she was experiencing, so they offered to buy her a bottle of Chelsea hot drink.

One of the kidnappers volunteered to go to town and buy it and when he wasted a lot of time, the second person decided to go and check on him. 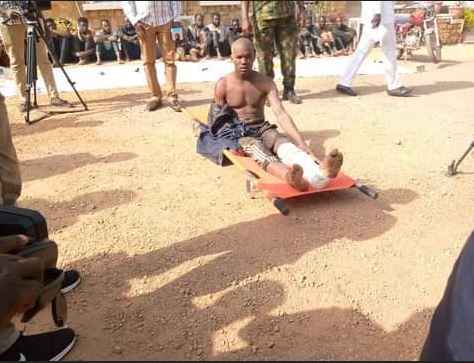 The only one left to guard her, after waiting for another 30 minutes, also decided to check on the others. .

After some minutes, she untied herself and started running back to the road, where a good samaritan gave her transport fare back home. She told her father that she was held at Rukpokwu forest.

win
157
win
Nana Yaw Asare is a Tech Savvy who enjoys everything Tech, but also have passion for blogging.