The deceased who has been identified as Miss Vivian, a graduate of Federal College of Education, FCE, Obudu, was also accused of killing an Okada (motorcycle) rider in the area early this month.

She was set ablaze by a mob in Obudu, Cross Rivers state yesterday December 29th. Facebook user, Anya Vincent, who shared the story online, said residents of the area alleged that the lady assists robbers who terrorise the area.

Read what he wrote below

”This happened yesterday in obudu , Cross River State. She was burnt alive for allegedly aiding a group of robbers over time in terrorising residents and also killing innocent lives. That’s their version of the story. I’m not trying to justify her actions if the story is true. I’m saying that JUNGLE JUSTICE is wrong. No one should take the law into their hands. She should have been arrested and handed over to to the police. She deserved a fair trial.

Before you burn that person alive remember that if he or she were to be your loved one, you would plead for the law to take it’s course.
Most times these persons are even innocent…..Jungle justice is wrong.
I’m saying NO TO JUNGLE JUSTICE. 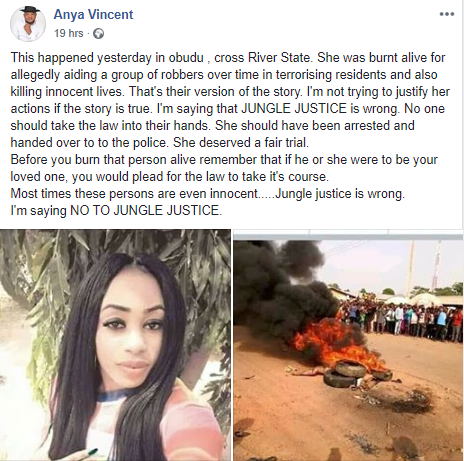