Bank of Ghana authorises issuance of commemorative coins to celebrate...

The Asantehene, Otumfuo Osei Tutu II, has been presented with the ‘Pillar of Peace’ award at the maiden Africa Premier Leadership Awards held in Kumasi.

Otumfuo Osei Tutu was recognised for the tremendous role he played in leading the Committee of Eminent Chiefs to restore peace to the Dagbon Traditional Area after 16 years of a bitter chieftaincy dispute, as well as his immense contribution to the peace, stability and development of the country.

Designed to recognise Africans who have excelled in their various fields of endeavour, the Africa Premier Leadership Awards were instituted by an Accra-based Ghanaian business solutions provider, the E ON 3 Group, in collaboration with the International Centre for the Promotion of Human Rights (CIPDH Africa).

Other implementing partners include the GBSH Consult Group Worldwide, the UAE-Africa Development Consortium, the Future Africa Foundation and Novel Vision. 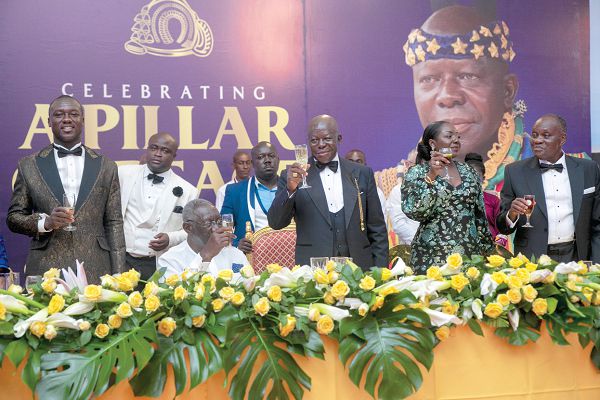 An array of dignitaries from Ghana and the African Diaspora attended the ceremony at the Manhyia Palace in Kumasi on December 29, 2019.

Those fron the African Diaspora were the Founder of the Panama World Trade and Investment Foundation, Dr Melida Harris Barrow; Senator Myron D. Jackson, the Vice-President of the Legislature of the US Virgin Islands; the Mayor of the City of Newark, New Jersey, USA, Mr Ras J. Baraka, and the Group Executive Chairman of the GBSH Consult Group Worldwide, Prof. Dr Tal Edgars, who is also the Chairman of the Africa Premier Leadership Awards.

A citation accompanying the Asantehene’s award said in part: “As Chair of the Committee of Eminent Chiefs that was charged by the then President John Agyekum Kufuor to find a lasting solution to the then seemingly intractable Dagbon chieftaincy crisis, your unparalleled skills in negotiation, arbitration and conflict resolution resulted in the amicable resolution of the age-old chieftaincy crisis that brought peace to the Dagbon people.” 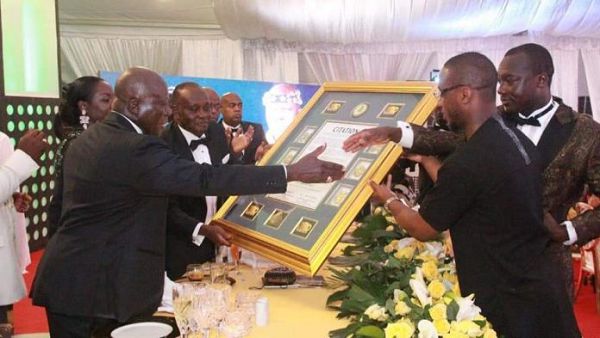 Sharing honour
Accepting the award, Otumfuo Osei Tutu said nothing was more momentous and rewarding for him in 2019 than the resolution of the Dagbon crisis and the resumption of operations of Anglogold Ashanti, Obuasi Mine.

“Sixteen traumatic, agonising years had finally ended and brothers could look in each other’s eyes, not in hate but in love, once more,” he said of the Dagbon crisis.

The Asantehene said he shared the honour of the award with the other members of the Committee of Eminent Chiefs.

“If society recognises our effort, it is only right that we share the honour with all participants — principally my two brothers Eminent Chiefs, the Nayiri, Naa Bohogu Abdulai Mahami Sheriga, and the Yagbonwura, Tuntumba Boresa Suleman Jakpa, who combined wisdom and customary knowledge and sustained our efforts,” he stated.

He also acknowledged the inputs of political, religious and civil society leaders and, most of all, the parties in the dispute to end the crisis.

Taking a look at this year’s general election, Otumfuo Osei Tutu said on the face of it, there should be no reason Ghanaians should be nervous about another election because, “after all, this will be the eighth election in our Fourth Republic, and with the experience of seven peaceful elections behind us, it is surely time for us to take it all in our stride and celebrate it like a democratic Adaekese”.

Nonetheless, he said, the disturbances in parts of the sub-region called for some caution and challenged politicians to conduct their campaigns “with more light and less heat”.

In a speech, Dr Barrow, who was the Guest Speaker at the event, said the African Diaspora was proud of Otumfuo Osei Tutu for continuing to make a positive impact not only on his people but also the country and Africa and the world.

She said Ghana and the African Diaspora would have to work to deepen trade, adding that she was going to work to bring trade missions to Ghana.

Taking his turn to speak at the event, Mr Baraka said the ceremony, coming in the ‘Year of Return’, was significant in many ways.

He called on Ghana to place emphasis on industrial development, which he said was key to driving economic growth.

Meanwhile, the Bank of Ghana (BoG) has authorised the issuance of commemorative gold coins to celebrate the 20th anniversary of the Asantehene.

They will be issued by the E ON 3 Group, working with the Manhyia Palace on the 70th birthday of the Asantehene on May 6, 2020.

Such coins have the perfect legal tender status and can be used to make purchases.

However, the coins, which are minted in limited quantities, may be sold at higher values.